On Thursday 10 December 2020, Loïg Chesnais-Girard, Chairman of the Brittany Regional Council, and Dominique Lallement, Chairman of the Board of Carenco, signed the contract that binds them for the next 15 years for the public service delegation of the Concarneau shipbuilding and repair port. After two years of negotiations, this decision was widely applauded by local elected officials and the IPC federation of companies.

Following a consultation that began at the end of 2018, the Brittany Region, which owns the Concarneau shipbuilding and repair port, selected CARENCO, which joins the subsidiary of CCIMBO (INSFO) and SEMCAR as the new port concession holder, with effect from 1 January 2021 and for the next 15 years. CARENCO’s bid and project “meet the ambitions of the Region, particularly for the economic and environmental aspects.”

The ceremony, which had to be kept small due to the health crisis, took place in the workshops of PIRIOU NAVAL SERVICES, in the presence of the Chairman of the CCIMBO, Frank Bellion, the Chairman of CCI Bretagne, Jean-François Garrec, the Mayor of Concarneau, Marc Bigot, the Chairman of CCA, Olivier Bellec, the Chairman of the Syndicat Mixte Pêche Plaisance de Cornouaille, Mickaël Quernez, regional councillors Gaël Le Meur and Rolland Jourdain, several local elected officials and representatives as well as IPC representatives. Loïg Chesnais-Girard emphasised that “Concarneau is an important port for the Brittany Region, with industrial facilities that make the difference. The infrastructure is remarkable and has been completed in particular thanks to the commitment of the port’s economic players.” He indicated that “the new concession will bring about the upgrade of the 2,000-tonne boat lift for the next 40 years and {within five years} will see the 130-metre dry dock being covered once its door has been replaced.” The 400-tonne sling hoist, which came into operation in 2017, completes these unique infrastructures in Brittany. “With the necessary investments and CARENCO’s management, the strengths of the different players will be able to be combined to continue to develop jobs.”

“Although the model changes with the creation of CARENCO, which will be in charge of all the missions of the future concession for shipbuilding and repair, it is the result of a long-term partnership between the CCIMBO chamber of commerce and industry, and the professionals of Concarneau port,” emphasised Jean-François Garrec, Chairman of the Chamber of Commerce and Industry of Brittany and Chairman of the Supervisory Board of Carenco. “Consultation, determination, work and endurance have made it possible to complete all the projects, thanks to which there are now around 50 companies and over 1,000 people working on the port every day.”

“Concarneau is a major place for shipbuilding and repairs in both France and in the world, and that’s the way it must stay!” he stated at the inauguration of the new 22,000 sq. m technical area, which is at the forefront of environmental standards.

“CARENCO will pursue this momentum with an ambitious €25M investment programme for the next 15 years with financial support from the Brittany Region.”

Marc Bigot, Mayor of Concarneau pointed out that “the fishing industry, followed by shipbuilding and repair built the port of Concarneau. It is therefore legitimate that local participants, brought together within SEMCAR, have committed alongside the CCI to ensure its future.” He also commented that “CARENCO’s project perfectly responds to the economic and environmental challenges of Concarneau port.” He emphasised that the investments planned for the dry dock are a real challenge, just a few hundred metres from the walled city, but that they are also a necessity, as they will secure companies and the jobs they propose. The workload plan of these projects confirms these ambitions.

Applauding the commitment of CARENCO, which is targeting ISO 14001 certification within five years, he concluded with a message shared by everyone within the Interprofession du Port de Concarneau (joint trade organisation of Concarneau port): “We can be proud of this new step which starts now!” 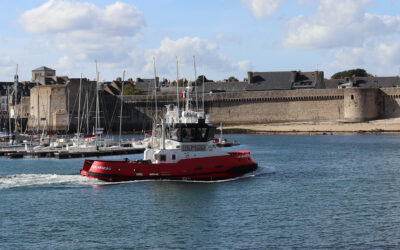 LE MOROS, the new tugboat for Concarneau port, has arrived!